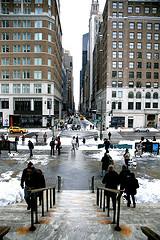 Midtown Manhattan in the heart of NYC is not exactly best-known for its lazy walkways and peaceful pedestrian plazas.  But the city wants that to change.  With that in mind, there are plans to construct a promenade  to connect six areas through crosswalks, thus linking 51st to 57th Streets between Sixth and Seventh Avenues.  The idea is that ultimately, a pedestrian plaza spanning a quarter-of-a-mile via building lobbies.  While doing this, according to NYC lawyer, Jonathan C Reiter, the Department of Transport will set up stop signs in the middle of blocks, as well as crosswalks and speed bumps in an attempt to enhance pedestrian safety.


But while these plans may indeed help pedestrian safety in the city, drivers are stressing that they will worsen traffic.  However, since the Tri-State Transportation Campaign identified the most dangerous roads in the area and thus put forward the implementation of safety measures, it seems safety has to take a front seat, even if this distressing to drivers.


But maybe there is a solution for these concerned drivers.  The bike-sharing program is being planned for NYC for July which will definitely be good news for traffic in the area.  It’s a great idea, and for sure good for the environment – cycling is definitely better than driving – but one of the concerns of New Yorkers is the placement of the bikes.


So here are the answers that have been given so far: there will be around four dozen bike stations along the West Side of Manhattan, including: Broadway (east side); Columbus Circle to Pennsylvania Station. Then there will also be smaller stations on sidewalks including the southeast corner of Eight Avenue and 41st Street in front of The New York Times Building, as well as parks, like Hudson River Park. Cyclists will have the option of taking out a yearly membership (for approximately $100) and be given a key, or to pay on a one-time basis at kiosks.


Perhaps once the pedestrian plazas are introduced in Manhattan, the addition of cyclists will limit the amount of drivers and thus the traffic situation in the city will remain the same (or even improve) but certainly not get any worse.  That is at least the hope for the Big Apple.