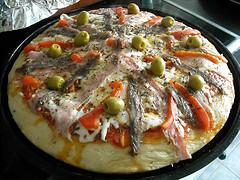 What is the cheapest pizza to be found in Manhattan?  One dollar isn’t exactly expensive, but if a slice can be found for less than a dollar, then that has to be a real bargain.  Well, now, the midtown Manhattan New Yorker can just cruise along Sixth Avenue amidst 37th and 38th Streets and indeed pay a mere 75 cents for a slice of pizza.


So how did the pizza at 2 Bros. Pizza eatery get so cheap? Well, it started off with a nice neighborly brawl.  Sixth Avenue Pizza dropped their slices to 79 cents and thus 2 Bros. Pizza right next door had to respond in kind, offering their pizza slice for 75 cents too.  Not wanting to let this go, Sixth Avenue Pizza dropped the four additional cents to stay competitive.  According to the manager of that store Mohit Kumar, the aim now is for “maximum sale, minimum profit.”


Since so many Pizza places in the area already offer a slice for $1, there had to be something in these Pizza stores – the managers felt – that would draw in the clientele.  And that is exactly what has happened.  Although it seems that while these stores are competing nicely, they’re making practically zero profit on each slice, resulting in just the customers being the winners.


Thankfully neither Pizza store owner has any plan to further decrease the already ridiculously low price.  At least, that’s what they’re claiming.


One might want to keep frequenting these pizza joints though since the New York Pizza Department no longer exists. It has been replaced by the Plaza Mexican Grill on the corner of Chittenden Avenue and High Street.  Here, there are no pizzas in sight; this is a restaurant offering Mexican food.  And it’s a little pricier than the above Pizza eateries, with prices starting at $1.50 for chips and salsa to $6.99 for a taco salad or burrito.