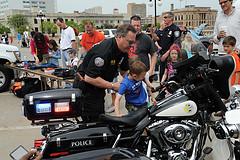 Of course the party had to carry on in to Times Square, following the victory of the New York Giants at Sunday’s Super Bowl.  It was quite a scene as tons of fans emptied out of sports bars yelling “Giants! Giants! Giants!”  Drivers were shouting the same out of their windows and passers-by were roaring.  Police officers tried to ensure the situation was kept under control through crowd-management but it seemed like they were overwhelmed by the sheer volume of people coming out in their blue-and-white Giants attire.  And keeping it all under control and pleasant is important given what happened the last time the Giants were in the Super Bowl four years ago.  At that event, a staggering 176 drunken driving arrests took place in New Jersey which marks the second highest total in the state for a Super Bowl Sunday.  There can be a lot of fun and celebration; but it has to be kept under control.


Because the city was so proud of itself with its win, the mayor, Michael Bloomberg promised a ticker-tape parade and ceremony would be held for the Giants a couple of days later.  As he pointed out, “Big Blue gave us a game to remember, and on Tuesday we're going to give them a parade to remember.” An anticipated 1 million spectators were set to show up at MetLife Stadium.