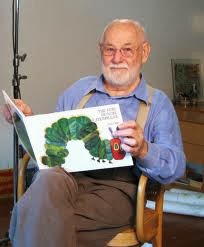 The New York Public Library is celebrating children's literature with a new exhibit in Midtown Manhattan. The project, which features books ranging from 'The Cat in the Hat' to 'The Hobbit', lists 100 great books from the last 100 years.
The list also included books such as 'Where the Wild Things Are', 'Pippi Longstocking' and 'Harry Potter and the Sorcerer's Stone.'

Beloved children's author Eric Carle, famous for books like 'The Very Hungry Caterpillar', and 'Brown Bear, Brown Bear, What Do You See?', as well as Judy Blume, author of  'Tales of a Fourth Grade Nothing' and 'Are You There, God? It's Me, Margaret', joined several librarians for a reading and panel discussion.

Leonard Marcus, moderator and curator of the exhibit, said: "Viewed over time, children's books are the collected memory of our hopes and dreams. They are the message in a bottle that each generation tosses out to the next generation in the hope that it may wash ashore and be read and be taken to heart."

Blume discussed her book 'Tales of a Fourth Grade Nothing', explaining that when she was in fourth grade, the stories were already forming in her head. "But I never told anybody about them because I thought if I did they would think I was weird," she said.

Carle talked about his first book, 'The Very Hungry Caterpillar', revealing that the character was first created by folding paper. Carle originally thought he would be a bookworm, named Willie the Worm. "And I had this wonderful editor and she didn't like the worm so much," Carle explained.

Carle also read his new book 'Friends' to his young audience, a story about a boy on a journey to find his friend.
Posted by Miguel Monge at 1:07 AM