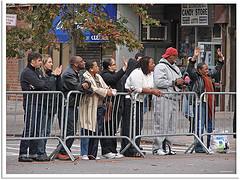 It’s everyone’s worst nightmare. Well, not quite, but no-one likes the thought of not remembering where they parked their car.  And it’s especially irritating if you’ve just run a marathon….literally!


That is exactly what happened to Charles Petraske, 34-year old New York marathon runner who had parked his car in midtown Manhattan the day of the ING New York City Marathon.  Thereafter he hopped on a bus to get to the start of the race, and then, after an impressive three hours and 16 minutes, he completed his marathon.


The only problem was, what happened next.  Petraske took $40 and his car keys to the race’s start line and left the ticket on the dashboard.  When he returned to Bryant Park however, he couldn’t see anything familiar, least of all his car – it simply wasn’t there.  The only memory he had of where he parked the car was that it was near a flashing billboard that had commercials for MasterCard, New York State Lottery and Coke Mini…not so helpful.


Of course, just calling all the garages wasn’t going to help and the police didn’t exactly have all the time in the world to help the tired, sweaty runner either.  They said they could only identify a towed car.  In the end, it was his wife who was called into the rescue – she came from Albany to pick him up.


Moral of the story?  Always make sure you make peace with your wife if you’ve had a fight before leaving home; you never know when you might end up losing your car and needing a rescue!