Getting Away from It All 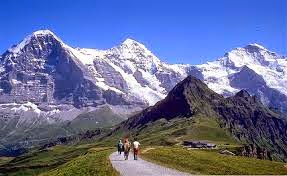 New York is an absolutely fabulous place to live.  From the city’s iconic skyline, Manhattan’s grid, the fact that everything stays open so late (bars til 4 am!) and the extremely high life expectancy (such as Susannah Mushatt Jones, 113 year old NYC resident who is currently the world’s third oldest person), this is a great place for anyone to live.

But it doesn’t come without its problems. A recent report found that the city’s 311 complaint hotline receives an average of 300,000 annual calls about the noise.  Perhaps that’s why it is so often referred to as “the city that never sleeps.”  Still, that’s not fun when you’re trying to sleep there.

So, where can you go to get away from it all?  Switzerland is pretty antithetical to everything that is New York, so this article examines three areas there and tries to get a sense of the experiences people have.

First, Saas-Fee – is a stunning area, perfect for a relaxing, “get-away-from-it-all” break.  For a couple who just wants to leave all the craziness behind for a bit, it truly is perfect.  In fact, that’s exactly what one couple did.  Marnin Michaels and Melissa Kaplan recently purchased a ski chalet in the neighborhood.  Michaels describes it as “a second-tier ski town…nestled under a ring of glacier-topped mountains and enjoys sun most of the winter.” What could be a better way of escaping it all than that?

Then there is Atelier, described by one travel reviewer as “paradise in a private winter wonderland.”  Now, New York may be many things, but privacy and silence are not words often associated with it.  The Atelier on the other hand, was dropped into the middle of a secluded private fairy tale forest and houses a fireplace, sitting rooms, gallery and more. Ambience is its middle name.

Nendaz is romantic, relaxing, picturesque and in fact, simply breathtaking. This is exactly what many people should expect to find at the Haute-Nendaz Chalet. After a few days of taking in the Rhone Valley view and biking in the alps, New Yorkers might actually be excited to get back to the hubbub of New York City…but always remember the relaxation possibilities a mere flight away!
Posted by Miguel Monge at 12:42 AM