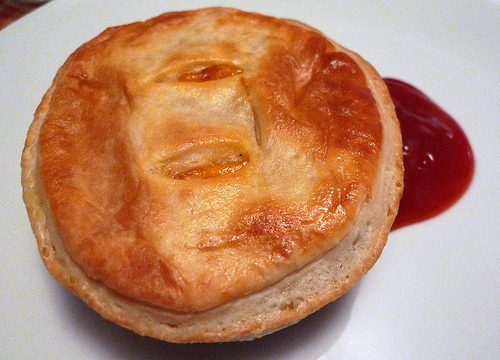 While Pie Face has long been successful as a chain in Australia, it now boasts three locations in New York City as well, one of which is in Midtown Manhattan, located at Seventh Avenue between 35th and 36th Streets.  This one – along with its traditional fare of meat, veggie and other pies – also offers quiches and breakfast pies.  According to Spiro Bellas, National Coffee Trainer, while their specialty is a meat pie, traditional apple and cherry pies, they offer “all sorts” of other pies too.


In addition to its pies, the franchise has earned a reputation for its coffee program, with the Midtown location featuring a self-serve coffee bar offering different strength coffees along with a full service espresso bar that produces Australian ‘flat whites’ (a shot of espresso with steamed milk and a thin  layer of foam).


The Manhattan branch of Pie Face is the largest in NYC, open 24 hours a day and is the first that has a seating area, with wooden paneling to create a “warm, earthy and natural feel.”  There are no artificial preservatives used in the food either.